The United States has been involved in several wars throughout history. From fighting for new lands to fighting for other’s independence, here’s a guide to help you review the U.S. wars after 1845.

*Note: The U.S. was involved in other wars prior to these.

Cause: Basically, President Polk believed the U.S. had a “Manifest Destiny” to expand from coast to coast.

Impact: The U.S. gained a lot of new territory, and that raised questions of how that land should be incorporated into the United States. Debates over whether or not slavery should be allowed on the new land increased the tension that ultimately led to the Civil War.

Texas and the Mexican Cession (as shown on this map) became part of the United States after the Mexican-American War. “Map of US 1849,” Union to Disunion, accessed June 16, 2018, http://projects.leadr.msu.edu/uniontodisunion/items/show/305.

Cause: Several southern states attempted to secede from (leave) the United States. President Lincoln did not allow it. He said the states did not have that sort of power granted to them in the U.S. Constitution.

Impact: More Americans died in this war than in any other (because every death was an Anerican death). The South was devastated and had to rebuild politically, economically, and socially. Slavery was abolished in the United States, and the former slaves set out to make new lives for themselves (which was not made easy by continued racism in the South). 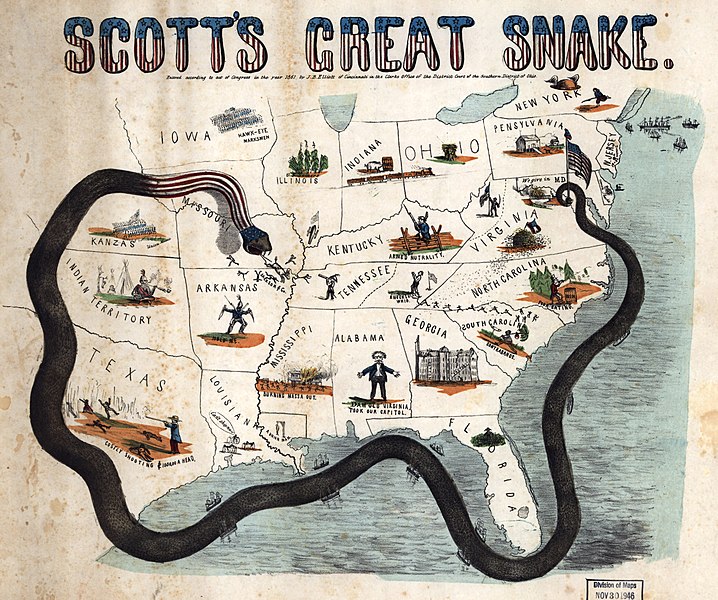 The Anaconda Plan was one military strategy the Union used to defeat the Confederate States of America. It was a naval blockade designed to strangle the South. The Library of Congress/American Memory (Digital ID: g3701s cw0011000)

Combatants: Spain and The United States

Result: The U.S. defeated Spain after a few short months. Cuba gained its independence (but the U.S. continued to meddle with their government) and Puerto Rico, Guam, and the Philippines became part of the United States. This war is a major example of U.S. imperialism.

Also, Theodore Roosevelt became a war hero which would later help him get elected as the next president of the United States.

the Central Powers: Germany, Austria-Hungary, Bulgaria and the Ottoman Empire

***Be sure to also review the terms Triple Alliance and Triple Entente.***

Key Points: After war broke out in Europe, the U.S. tried to stay out of it. This was a very deadly war due to new technologies including machine guns, tanks, and poison gas. Trenches were dug across Europe and gas masks were donned to try and defend against these new weapons. No-mans land (area between the trenches) was filled with barbed wire and land mines.

So, President Wilson adopted a policy of neutrality. However, the U.S. continued to do business with European countries, and some Americans continued to travel in Europe. Meanwhile, German U-boats (submarines) engaged in unrestricted submarine warfare. Americans were outraged in 1915 when U-boats sunk the Lusitania, a British passenger liner carrying many U.S. citizens. However, it wasn’t until U-boats sunk several more U.S. merchant ships in early 1917 that we declared war.

Aftermath: WWI ended with the signing of the Treaty of Versailles. President Woodrow Wilson’s Fourteen Points were his ultimate plan for world peace. They contained propositions like freedom of the seas, self-determination, and a League of Nations to keep the peace. The League of Nations was formed, but the senate blocked the U.S. from joining it. They feared being pulled into another conflict, and after that the U.S. entered a period of isolationism that would last until world war brewed again…

Combatants: A lot of countries, but the main ones you need to know are:

The Allied Powers: Great Britain, Soviet Union, France (before they fell to Germany), and the United States

***The leaders of Great Britain (Churchill), the Soviet Union (Stalin), and the U.S. (FDR) were known as The Big Three.

Key Points: WWII started when Germany invaded Poland, but trouble was brewing in Europe and Asia even before 1939. The U.S. resisted involvement at first, but over time we became increasingly entangled by providing aid to our unofficial allies. The Neutrality Acts were a series of laws designed to allow the U.S. to aid countries like Britain and France. The U.S. level involvement went through these stages:

Several atrocities occurred during WWII, but two you need to be sure and review are the Holocaust and Japanese American Internment. You could also argue that the atomic bombs were atrocities.

Women and minorities played a bigger role in WWII than in any previous war, but troops were still segregated and women did not get to see active combat until the 1990s (learn more about women’s military history on this timeline: http://www.history.org/history/teaching/enewsletter/volume7/images/nov/women_military_timeline.pdf)

Even though many people in the U.S. were against getting involved in both world wars, once we were involved people on the home front did practically everything they could to contribute to the war effort. People bought war bonds to help finance both world wars, they grew their own food in backyard “victory gardens”, women when to work in factories building airplanes, during WWII certain goods  were rationed, etc.

Finally, in 1945, the allies were victorious and the war ended. The end came in Europe first, when Hitler surrendered. A few months later, President Truman decided to drop atomic bombs on the Japanese civilian cities of Hiroshima and Nagasaki. Those two bombs killed hundreds of thousands of people. Those were the only two times in history nuclear weapons have been used on real targets. Japan surrendered shortly after, ending the last fighting of WWII.

After the war, the United Nations was formed to help maintain peace in the world. Also, President Truman integrated the military.

…this post is still under construction. Check back soon to learn the rest!

Throughout the year I will add summaries for each era of U.S. History! Keep checking back for more reviews.

The Many Causes of the Civil War

Visit the Stress Relief page to download these posters and get tips for managing your stress.